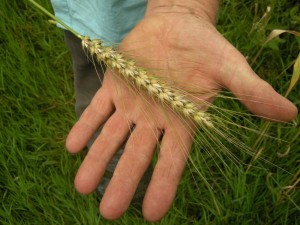 There are three main types of thatch commonly used today: 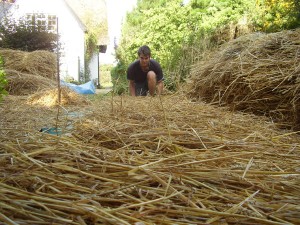 Long straw was traditionally the most common thatching material in England, the product of threshed wheat straw and rye, and less commonly oats or barley. It is produced by cutting the cereal low down and binding it into large sheaves (in the past this was done by hand but nowadays is done by a reaper-binder). The sheaves are stooked it in the field to continue ripening, and then stored until ready for threshing to remove the grain. Historically, hand flailing was used. This bruised the stems over part of their length, and jumbled them up so that the ears no longer faced in the same direction. Threshing became mechanised in the 19th century. 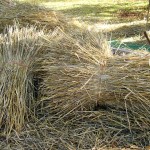 The straw is prepared for thatching by cutting the sheaves and shaking the straw onto the ground to form a thick layered bed.  It is wetted  to make it more pliable, and then large handfuls are pulled or ‘drawn’ from the heap to form bundles known as ‘yealms’.  Drawing helps to remove some of the leaf from the straw, and enables short straws to be discarded. There is no attempt to align the straws in one direction, so ears and butt ends are mixed.

The surface of long straw is finished by raking, hand plucking and occasionally clipping.

Surface spars and liggers are used to secure all eaves, which is a distinctive feature of this method. Eaves are cut to shape and verges are either cut or rolled.

Long straw has a more rounded and shaggy appearance because the materials cannot be tightly dressed into its fixings, and because ears of the cereal are visible on the surface.

Not all thatchers are trained in long straw so it is important to select one with a proven reputation to undertake work of this nature.

Read more about Long Straw thatching in this article from the Building Conservation Directory. 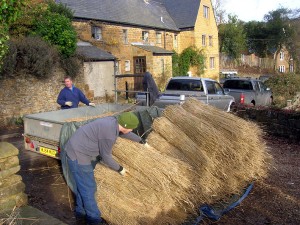 Combed wheat reed (also known as Devon reed) is derived from  the same type of straw as long straw but is prepared and finished differently.

After stooking, it was tied into smaller bundles, keeping the stems aligned with the ears all at one end. It was then carefully threshed by flailing only the ears or by lashing the end of the bundle over a wooden rack. This caused less bruising of the stems, which increased the durability of the straw when used for thatching and animal bedding. The straw was then either raked or combed by drawing it across a series of metal spikes to remove the leaf, leaving clean, smooth stems with the ears all facing in the same direction. The process was mechanised in the early 19th century with the development of various threshing and reed combing machines.

After threshing and combing, the straw is tied into bundles ready for thatching.

Applied as new work or to a sound substrate, bundles are untied and laid in the same direction on the roof (with the butts of the straw facing downwards) and are fixed and dressed into place with a legget. The finished coat is sheared to form a smooth coat, and the eaves and verges trimmed to shape with an eaves hook. 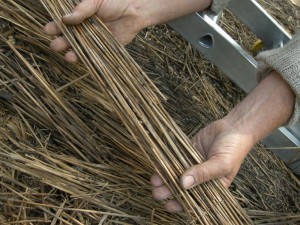 Water reed (Phragmites australis) (also known as Norfolk Reed and Continental Water Reed) is a wetland plant, which flourishes in undrained areas, at a certain stage in its ecology.

Until the mid-20th century, water reed thatching was mainly found in areas with abundant natural reed beds, such as the Norfolk Broads, the East Anglian fens and a few river estuaries around the South coast.

Water reed grows tall, up to 2.5m and is harvested low on the stem. Reeds are sorted into bundles of different length. The longest bunches are used at the eaves and the shorter towards the ridge. The resulting bunches are relatively light and stiff and their application on the roof requires a fairly even and sound substrate. Bunches are applied to the roof in horizontal courses, and the reed is dressed into place with a legget which forces the butt ends upward to tighten it into its fixings and provide an even surface finish.

Because water reed is not pliable, the ridging is done in another material, either sedge (which naturally grows next to water reed) or straw. The ridge will stand usually out as a ‘block ridge’.

The resulting appearance is extremely uniform and tends to closely follow the roof structure line. 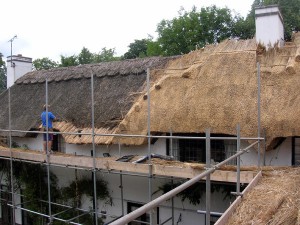 Fen sedge is a perennial wetland plant which often grows alongside water reed, has long, sword-like leaves with razor-sharp edges. It is most commonly used as ridging material, but has been used for main coat work. 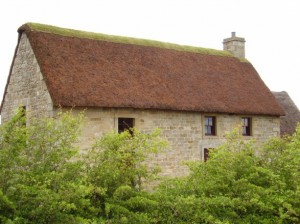 Many types of vegetation were used for thatching in the past, but the majority have fallen from favour throughout the 20th century. Part of the reason for this was improvements in transport, which enabled straw or water reed to be transported to most areas of the UK. In addition, the status of many thatched buildings improved, which meant that their care and maintenance depended less on the availability of cheap local materials that might need regular renewal, and more on the ability of their owners to pay for a more durable material and thus increase the intervals between re-thatching.

Heather was once widely used in areas where wheat wasn’t grown, such as north east England and Scotland, and gorse and bracken is known to have been used in the south of England.

Sourcing some of these materials and finding a thatcher with experience in applying them can be difficult.